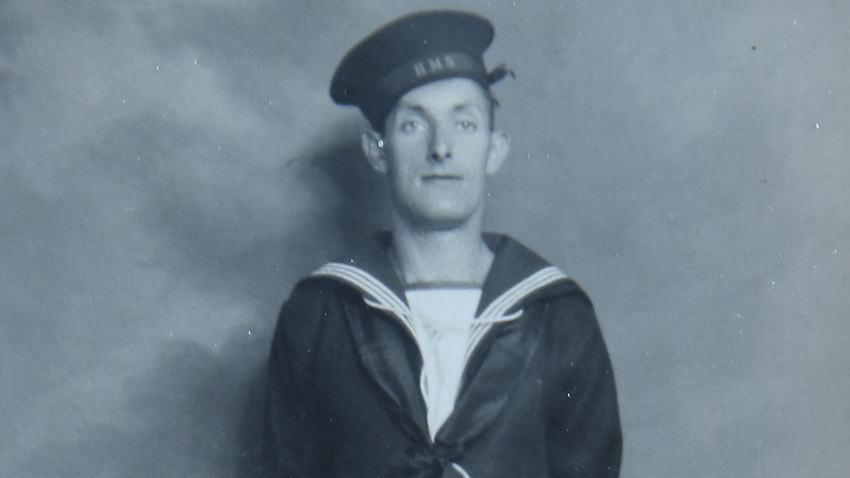 Crouched down, seasick and cold, Albert Hewitt peered into the dark Atlantic night.  Any enemy submarines around?  With swell as high as the dummy funnel he’d climbed, he couldn’t see much.  At 4am, the end of his four hour watch, Albert found himself unable to descend, so spent another miserable four hours up there.  What a way to spend your 21st birthday!

En route to Gibraltar on 1st December 1941, Albert was realising a boyhood dream.  A sea cadet at twelve in Ramsgate, he longed to join the navy.  His wartime call-up meant he was no longer a gardener but O/S Hewitt C/JX279054.

Entering the Mediterranean theatre at a crucial time, Albert literally had a baptism of fire.  Arriving in Malta, bombs were dropping around him.  It was the middle of the siege of Malta.  Germany and Italy were trying to destroy this crucial British naval base.  Albert boarded a light cruiser, HMS Penelope, part of a ship’s company for the first time.

Tasked with sinking enemy convoys bound for North Africa, and escorting Allied shipping to Alexandria, Penelope was in the thick of the action in 1942.  Albert was a loader of the four inch anti-aircraft guns.  He recalled being attacked by the Italian battle fleet: “my experience was hearing shells screaming, being engulfed in smoke and close up to the guns.”

The Penelope was dubbed HMS Pepperpot for the hits she took.  In dry dock for repairs, Albert faced intensive enemy bombing.  Blown off his feet whilst holding a four inch shell, he lost consciousness but came round with the shell still in his hands and loaded the gun.

Albert’s chaplain quoted Psalm 91:7 “A thousand may fall at your side, ten thousand at your right hand, but it will not come near you.”  God had preserved his life.  A strafing run hospitalised Albert with gunshot wounds to the chest, but these proved not to be serious.

Leaving hospital, Albert was billeted in Fort Magdalena whilst the Penelope sailed to America for repairs.  Daily bombing continued.  One day Albert found a Christian leaflet on his bed.  It told of Finnish soldiers singing “Safe in the arms of Jesus” before meeting their deaths by a Russian firing squad.  This made Albert think about eternal things for the first time.  Those Finnish soldiers were sure of going to heaven: what about him?

Albert flew with other shipless-sailors to Cairo.  Their Dakota transport aircraft shook off a Messerschmitt but was caught in searchlights and hit in the tail.  Albert was glad to survive: he had a life jacket but no parachute.

In Egypt, the whole direction of Albert’s life changed.  It was Christmas Day 1942.  He was invited ashore to a Christian meeting.  Albert recalled: “I heard for the first time, I was in the sight of Almighty God a sinner.  I came to know the Lord Jesus as my personal Saviour and Lord.”  Previously Albert had lied about his age to get a gardening job and drunk freely with his shipmates.  Now he was different.  Albert wanted to please the Lord Jesus Christ who had loved him so much to leave heaven to die for his sins.

Albert went back to his ship (now HMS Woolwich) knowing he was a new person.  Eager to tell everyone, he invited his shipmates to a gospel meeting on the gundeck.  No-one turned up except the gunnery officer and the ship’s policeman!

As the tide of war turned, Albert joined a naval landing party supporting the 8th Army (Desert Rats) in North Africa.  Moving to Naples, the Germans had mined the electrical circuits of many buildings, so it was an anxious time. 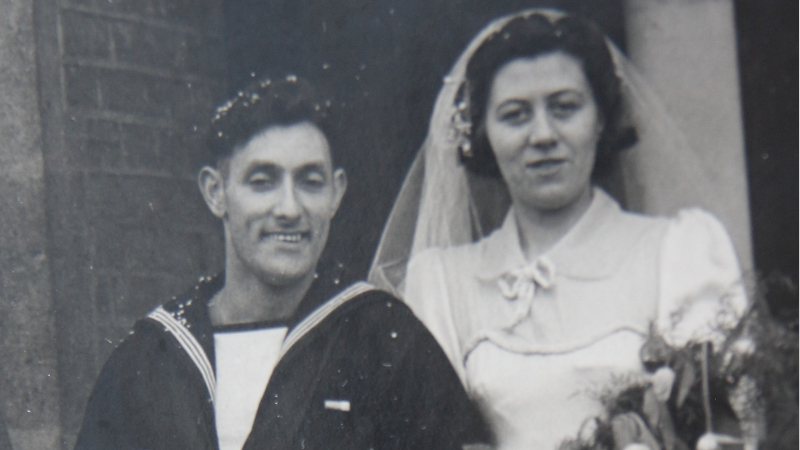 During 1944 Albert was shipped back to England where he attended a friend’s wedding.  He left his case behind.  A girl he met at the wedding looked after it.  Returning for it, Albert entered a wartime romance with Bertha.  They married on 24th Feb 1945; on 3rd Mar Albert sailed for Ceylon.

For Albert, the far east brought close encounters with huge rats and malaria rather than the enemy.  Returning home, Albert enjoyed a wonderful 57 years of marriage.  He and Bertha were blessed with seven children and prayed for one of them each day of the week.

Albert lived on until he was almost 99, finishing up in Cherry Court in St Peter’s, Broadstairs.  Stoical despite living with significant pain, Albert’s ready mind was alert to the end.

Albert had many vivid war stories to tell, but there was one story he liked to recount most.  Whoever he met, Albert loved to tell about one day in his life: Christmas Day 1942 – the day he turned from his sins and trusted his “wonderful Saviour, the Lord Jesus.”

Just like the Finnish soldiers he read about, Albert became certain he was going to heaven.  But this was not because he believed he was a good person.  “I’m a sinner” he used to say, “I sin every day.”

But Albert rejoiced in God’s grace, his undeserved offer to forgive sinners who own up and turn back to him.   Albert’s view of himself was simple: “I’m a sinner, saved by grace.”